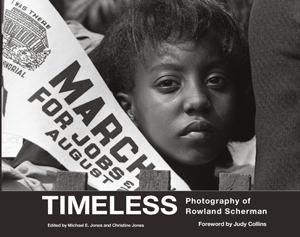 Print sales and exhibit information are available at RowlandScherman.com.

“Where’s that kid with the camera?”

I wore my Leica under my jacket for some reason. I moved my lapel back to show them and said, “Here I am.”

—Excerpt from Rowland Scherman’s Timeless essay on his first assignment with the Peace Corps.

From the Foreword by Judy Collins

“Rowland became a freelance photographer for LIFE magazine in the mid-sixties and the next time we met, I had a big hit with Joni Mitchell’s song, “Both Sides Now,” in 1967 on my album Wildflowers. Irene Nieves, a top editor at LIFE, decided she wanted to do a cover story on my career. Rowland came out to Los Angeles to photograph my sessions for my new album, Who Knows Where the Time Goes. We began recording on June 7, three days after Roberty Kennedy had been murdered at the Ambassador Hotel. Rowland had been on the campaign with Robert Kennedy, and like all of us, was in a state of shock. Music, it seemed, and art, was what might heal us.

“On May 2, of 1969, the issue of LIFE with my photo landed on the newsstands around the country. The caption under Rowland’s beautiful picture of me read ‘Gentle Voice Amid the Strife.’ The war was raging on, The Times were a-Changin’, and I certainly did not feel gentle or calm. But Rowland’s picture had a healing effect after all the drama of that year.

“I am so honored that some of my photographs can be seen in this brilliant collection of Rowland’s pictures. The gathering of his best tells the stories and give us the riveting portraits that make history come alive again… Rowland’s pictures are in a word, timeless.”

Rowland Scherman began taking pictures in New York in 1958. In 1961, he served as the first ­photographer for the Peace Corps. Traveling the world, he helped estab­lish an image for this newly formed ­government
agency. Going freelance in 1964, Scherman has ­subsequently done covers and photojournalism for LIFE, Time, Newsweek, Paris Match, Playboy, and National Geographic.

He won a Grammy in 1968 for an album cover of Bob Dylan, and in 1969 was voted Photographer of the Year by the Washington Art Directors’ Association.

He lived in Britain for seven years, and there created the book, Love Letters, a freestanding human typeface.
In 1991 he published a book of photographs about Elvis Presley’s influence on the American landscape––Elvis is Everywhere. Rowland Scherman now lives in Orleans, Massachusetts, where his work includes landscape photography and portraiture.

Something There Is
Scroll to top