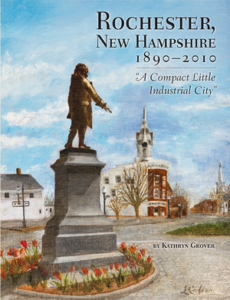 When McDuffee’s history was published in 1892, the town was on the verge of becoming a city. Its robust transportation network, woolen goods and shoe industries, and thriving commercial center all warranted city status. Still, making the transition from town to city was fraught with challenges. A newfound emphasis on the application of scientific understanding to municipal infrastructure, a growing interest in professionalism in urban management, the emergence of new technologies in transportation, industry, and entertainment presented both problems and opportunities to the new city.

Interspersed with articles that describe particular events in the city’s history, this book describes Rochester at the point of its early 1890s transition and then explores in detail its industrial, commercial, transportation, agricultural, political, and social worlds from the late nineteenth to the early twenty-first century.

Kathryn Grover is an independent researcher, writer, and editor in American social, ethnic, and local history. She is the author of The Brickyard: The Life, Death, and Legend of an Urban Neighborhood (2004), Lynn Album II: A Pictorial History (1996), The Fugitive’s Gibraltar: Escaping Slaves and Abolitionism in New Bedford, Massachusetts (2001), and Make A Way Somehow: African-American Life in a Northern Community (1994). She lives in Windsor, Vermont.

The Weirs, A Winnipesaukee Adventure