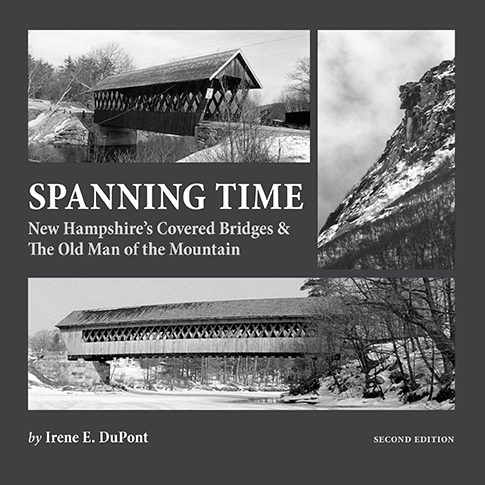 The covered bridge is an intrinsic part of our New England heritage. This unique silver-print photographic collection by Irene E. DuPont allows each individual structure to be admired in its natural setting. This second edition also includes a timeline history of New Hampshire’s Old Man of the Mountain.

From the Introduction: Spanning Time is inspired by the era going back to the 1800s when the White Mountains began to occupy a special place in the history of America. Men discovered the picturesque highlands of the mountains, which formed a relatively compact geographic area and chain with the Appalachian Mountains—the glacier-worn peaks dominated by the Old Man of the Mountain, Indian Head, and Mount Washington.

The covered bridge is an intrinsic part of our New England heritage. The Northeast acknowledges 192 covered bridges; 59 of these spans dot New Hampshire’s granite mountains and pined forests. The state’s covered bridges are representative of the various styles of crossings used in early New England. These pathways were a tribute to the great advances in bridge engineering of the day. The covered roadways also offered communities early billboard advertising. The local merchants posted signs for powders, potions, and cures. County fairs, political rallies, and church socials vied for wall space. And let us not forget the appeal of the covered bridge to young lovers. The “kissing bridge” afforded couples a quick embrace or stolen kiss in the darkness of its cover.

All of the covered bridge images and Francestown’s Main Street were on exhibit in the Rotunda, Washington, DC, Cannon House Office Building, September 29, 1993, and documented in the 103 d, Congressional Record, Volume 139, No. 130 sponsored by Time- Warner Communications and House Representative Dick Swett of New Hampshire.

Irene E. DuPont received her BA from Notre Dame College, attended the Art Institute of Boston, Massachusetts College of Art and Design, Savannah College of Art and Design, Hallmark Institute of Photography, and attended summer sessions at The Maine Photographic Workshop. She was a faculty member of the Nashua School System for thirty-five years and taught in both the public and private sectors. In 1993, she was the recipient of a C-SPAN National Teacher of the Year Award for “Innovative Use of Cable in the Classroom.” Irene is a juried member of both the Craftworker’s Guild of Bedford, New Hampshire, and New Hampshire Made.