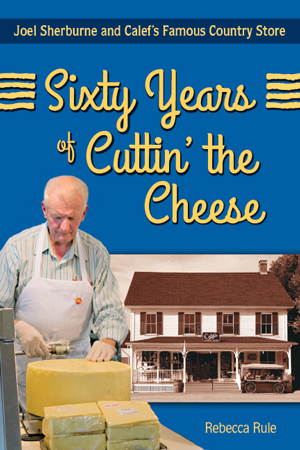 Sixty Years of Cuttin’ the Cheese

Rebecca Rule brings her Yankee style, love of all things New Hampshire, and natural wit, to the allure of the country store. It’s a taste of cheddar, the briny scent of the pickle barrel, creak of the floorboards and the call of the clerk greeting a daily customer, that somehow feels just right. It reminds us of home. The old-fashioned country store has been idolized by poets, artists and writers alike, but Calef’s Country Store is special.

Rule shares the intriguing tale of a family-owned store that became a true community center—a place to warm the bones—set among the stories of Joel Sherburne. A Calef’s employee for sixty years, Joel is a lover of cheese, prankster of high regard, and a life-long volunteer in his hometown of Barrington. In Sixty Years of Cuttin’ the Cheese we learn his tips for how to care for your cheese, and we are introduced to his Joelisms, like; “Set you back a week.” As in: “When Billy Calef sat Joel down and told him the store was to be sold out of the family, well, that set him back a week.”

Today Joel enjoys the friendship of the new owners, Greg Bolton and Len Angelo, whose vision of the old, enhanced by the new, has brought Calef’s to its 150th anniversary year with style and a thriving, mail order cheese trade. Illustrated with period photographs, Sixty Years of Cuttin’ the Cheese includes twenty-two secret recipes from Calef’s kitchen, like; Cheddar Cheese Crisps, Apple Cranberry Cheddar Muffins, and Smoky Cheese Chowder. So sit back with a plate of Rat Trap Cheddar, some ginger snaps, and reminisce with Joel and Becky around the old woodstove.

Rebecca Rule is a full-time writer, humorist, storyteller, and host for twelve years on NHPTV, first of the NH Authors Series, currently of Our Hometown. She’s the author of eleven books including The Best Revenge, named one of five essential NH Books by “NH Magazine” and Outstanding Work of Fiction by the NH Writers Project. She lives in Northwood with her husband, John Rule, six cats and three dogs, all rescues—except for John Rule and Reggie, a wire fox terrier. She loves cheese.