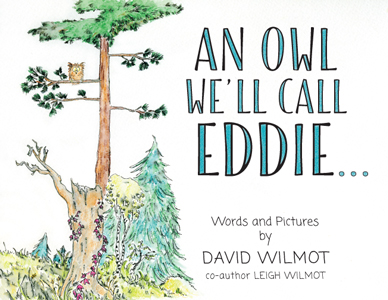 “This book appeared on my drawing table, one page after the other, in the winter of 1997-1998. My daughter Leigh, age 8 at the time, assumed co-authorship. She was convinced of its success, saying, ‘Kids’ll love Eddie!’ and ‘We’ll be millionaires.’ So, I drew a page every day for a few weeks. It was a gift from God!

“I used to go walking in the woods every weekend morning, communing with Nature and sometimes had back and forth communication with a family of Great-Horned owls.

“My son, Cole, and daughter, Leigh, often accompanied me on these early morning walks. They were magical!” — David Wilmot

Be Nice to the Weather Guy, Josh Judge; illustrated by Ginger Nelson
Scroll to top