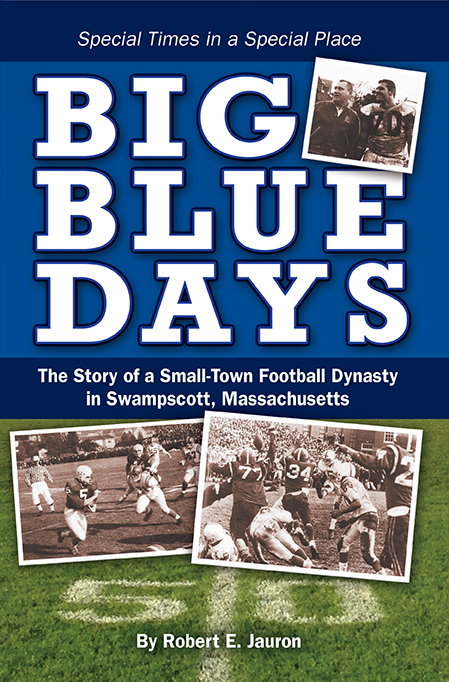 The Story of a Small-Town Football Dynasty in Swampscott, Massachusetts by Robert E. Jauron

In 1953, Stan Bondelevitch arrived in the small Massachusetts town of Swampscott to become the high school football coach. The Sculpins, as they were known, had managed to win just one game over the preceding two and a half seasons, finishing 1–21 during that period. In his first season as the new coach, Stan’s team recorded a winning record, came within a touchdown of claiming the conference title, and produced a shocking upset victory over a squad that had not lost in 31 straight games.

A master motivator and psychologist, Bondelevitch challenged his players to excel, while employing a unique blend of humor and positive reinforcement to galvanize them and an entire community. Coaches, teachers, students, parents, and Boosters joined together to form that community and create a remarkable environment—one of interest in and support for the efforts of a group of local teenagers playing as a team.

Robert Jauron, who played at Swampscott on Bondelevitch-coached teams in the mid-’60s, undertook to write this story about Stan’s Big Blue football program. Big Blue Days is based on extensive archival research, interviews of more than 50 individuals, and the author’s own experiences. It tells the tale of Swampscott High School football from 1953 through 1973, painting a portrait of the legendary, colorful head coach, relating the personal stories of a number of other coaches and players, detailing the program’s amazing success, and explaining why Jauron and many others recall those days in Swampscott as special times in a special place.

Robert Jauron is the son of one outstanding football coach and the brother of another. A graduate of Swampscott High School, Brown University, and Suffolk University Law School, Bob practiced law for 37 years before retiring in 2014. He and his wife, Sally, reside in Manchester, New Hampshire, but frequently return to Swampscott, Massachusetts, now home to their daughters, sons-in-law, grandchildren, and other close relatives. Big Blue Days is his first book.