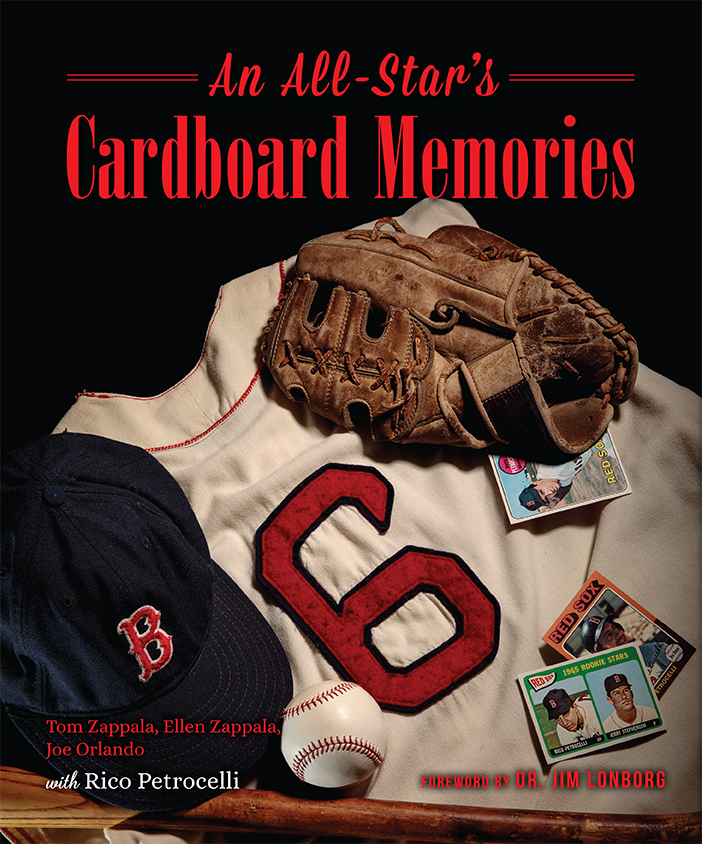 An All-Stars Cardboard Memories details the personalities, playing styles, and baseball trading cards of 56 Hall of Famers that played from the mid-1960s into the late-1990s.

Red Sox Hall of Famer, Rico Petrocelli, had the opportunity to play with or against all of these superstar players at some point during his great Red Sox career. Rico talks about his relationships with some of these greats and what their personalities were like, as well as how they played the game. From Clemente’s uncanny ability to hit to all fields effortlessly, to the effective motion of Hall of Fame knuckleballer Wilhelm, to the unbelievable bat control of Carew, Rico shares his views and opinions on the personalities and talent of some fabulous Golden Era players and the greats that played into the 1990s.

Besides Rico’s unique perspective on the players, card and collectibles expert Joe Orlando, CEO of Collectors Universe, Inc. and president of Professional Sports Authenticator (PSA), educates us on every aspect of the baseball cards that accompany these Hall of Famers. Joe discusses the various card issues of each player as well as their rarity and popularity. What are the most sought-after cards? Which cards are the most elusive? Are there any diamonds in the rough?

The Hall of Famers in this book span one of the greatest periods in baseball history. When Rico broke into the major leagues, Golden Era greats like Mantle, Berra, Koufax, Roberts, Mazeroski, and Drysdale still dominated the Major League Baseball landscape. Over the next 13 years, Rico shared the diamond with the next generation of players that became superstars—greats like Brett, Fisk, Yount, Gossage, and Eckersley, just to name a few who dominated the game.

Tom Zappala, a businessman in the greater Boston area, is passionate about maintaining the traditions and historical significance of our National Pastime. He co-authored The T206 Collection: The Players & Their Stories, The Cracker Jack Collection: Baseball’s Prized Players, The 100 Greatest Baseball Autographs, and Legendary Lumber: The Top 100 Player Bats in Baseball History. In addition to his popular Boston area radio talk show, Zappala co-hosts The Great American Collectibles Show, which airs nationally every week. He enjoys collecting vintage memorabilia for the love of the sport.

Ellen Zappala is president of ATS Communications, a multimedia marketing and consulting company. Co-author of The T206 Collection: The Players & Their Stories, The Cracker Jack Collection: Baseball’s Prized Players, The 100 Greatest Baseball Autographs, Legendary Lumber: The Top 100 Player Bats in Baseball History, and Nardo: Memoirs of a Boxing Champion, Zappala is a former newspaper publisher and a former president of the New England Press Association. She enjoys bringing the stories of Deadball Era and Golden Age players to life.

Joe Orlando is CEO of Collectors Universe, Inc. and president of Professional Sports Authenticator (PSA), the largest trading card and sports memorabilia authentication service in the hobby. Editor of the nationally distributed Sports Market Report (SMR), and an advanced collector, Orlando authored The Top 200 Sportscards in the Hobby, Collecting Sports Legends, and Legendary Lumber: The Top 100 Player Bats in Baseball History, and contributed to The T206 Collection: The Players & Their Stories, The Cracker Jack Collection: Baseball’s Prized Players, and The 100 Greatest Baseball Autographs.

Rico Petrocelli defined the position of “power-hitting” shortstop in his 13 years with Boston. The Red Sox Hall of Famer and All-Star was the first AL shortstop to hit 40 home runs in a season. He helped the team advance to two World Series including the 1967 “Impossible Dream” season which is detailed in his book, Tales from the 1967 Red Sox Dugout. Petrocelli has worked as manager, coach, radio/television analyst, and sports talk show host. He currently co-hosts The Great American Collectibles Show, and the Sirius MLB radio show Remember When with Ed Randall of New York’s WFAN.