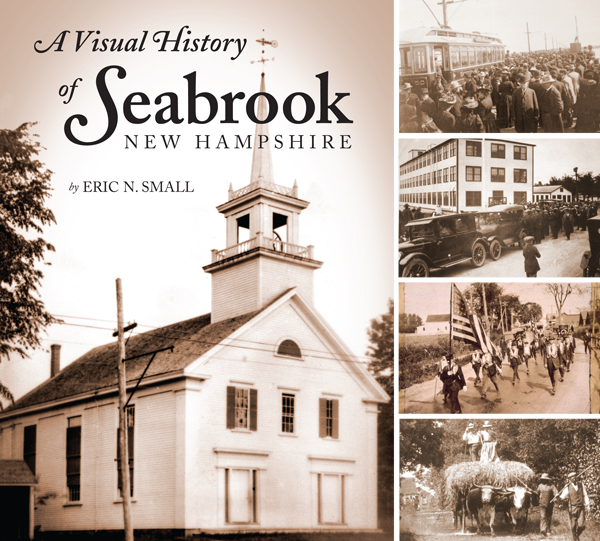 Available for purchase at the Seabrook Library.

A Visual History of Seabrook, New Hampshire provides a window into what life was like in a small seacoast town. Using over 450 historical images, author Eric N. Small, shares stories from 300 years of history. Eric, and his father before him, researched hundreds of names, dates and details, also gaining information over the years from many conversations with the oldest residents in town. He selected from a vast archive, finding just the right pictures, maps and documents, to masterfully tell the stories of the neighborhoods, families, and buildings of this unique community.

The town celebrated its two-hundredth anniversary in 1968, and at that time a commemorative book was published. It was the first of its kind, as no previous history had been written about Seabrook. It included 110 photographs. Since then, the historical society’s collection of old photos has grown to over 7,500, and it now has more than thirty genealogies of local families.

The town of Seabrook turns 250 years old as of June 2018, with a town-wide celebration planned for August 2018. This celebration gave the Historical Society an opportunity to reach a long-term goal of publishing a new photographic history. It begins with the building of the Garrison House in 1636 and chronicles the years until 1950, with a few photographs after that date.

This hardcover volume is intended to celebrate Seabrook’s history, inform current and future residents, and to commemorate the 250th anniversary.

Eric Small has been president of the Historical Society of Seabrook since 1973. Under his leadership, the society acquired and restored the Old South Meeting House, with financial help from the Town, a shoe maker’s shop, a museum in the old Brown Library, collected more than 7,000 old photos and acquired many artifacts for the museum. He has annually prepared slide programs of Seabrook’s history since 1974 that are now part of the annual Old Home Day program. He is a descendant of many of the first settlers from Hampton, New Hampshire and Salisbury, Massachusetts, including Batchelder, Brown, Chase, Dow, Eaton, Felch, Fowler, Gove, Knowles, Perkins, Philbrick and Walton families.

The Best is Yet to Be, Larry Sudbay