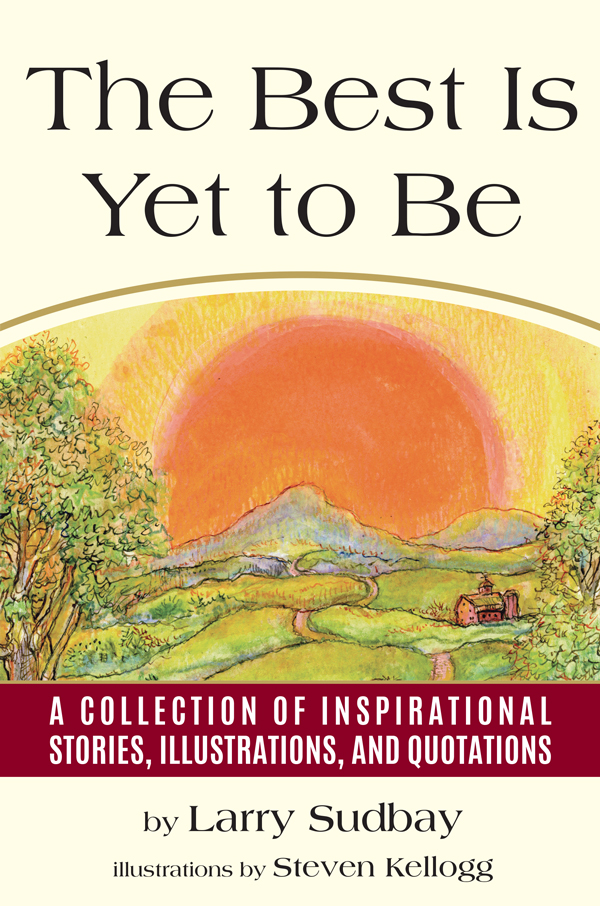 The Best is Yet to Be: A Collection of Inspirational Stories, Illustrations, and Quotations

The Best is Yet to Be is a unique collection of inspiring stories, some found and some authored, by a visionary entrepreneur. Originally shared over many years in a corporate newsletter, these tales cross the line from the business realm to a place of personal reflection. Illustrated by Steven Kellogg, the title is also a memoir of sorts for author Larry Sudbay.

Kellogg and Sudbay worked together to envision the group of paintings that now tell the tale of Sudbay’s life, even as they highlight certain periods that were particularly transformative. Readers will learn that Sudbay loves family, hard work, good ideas, and fair play. They will see that his lessons in life revolve around zest, resiliency, and his belief that the best is yet to be. It is in that spirit, that we share these intriguing tales and captivating artwork.

Larry Sudbay co-founded the technology services company SymQuest Group in 1996 as President & CEO. In 2015, SymQuest was acquired and became a wholly owned subsidiary of Konica Minolta. He currently consults with SymQuest Group and other leading technology companies in North America as a Partner with Riordan & Associates. He is a graduate of Iona Preparatory High School and the University of Vermont. Mr. Sudbay is a native New Yorker who makes his home with his family in Charlotte, Vermont.

Steven Kellogg has published over one hundred picture books during the past fifty years and is the award-winning illustrator of numerous picture books for children. He is the retailer-illustrator of such classic tall tales as Paul Bunyan, Pecos Bill, Johnny Appleseed, and Mike Fink. Mr. Kellogg was the 1989 recipient of the Regina Medal for his distinguished contribution to children’s literature.

The T206 Collection: The Players & their Stories, 2nd Edition Zappala,...