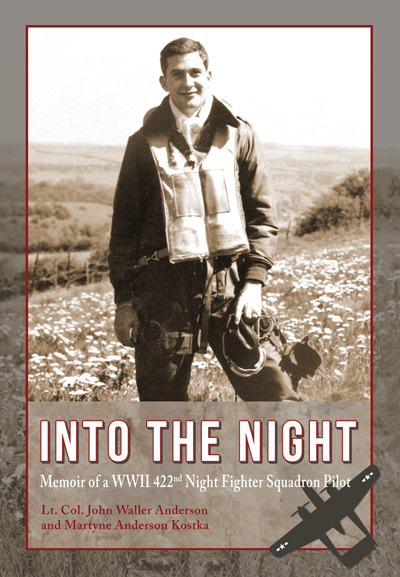 Books can be ordered by emailing: intothenight422@gmail.com

John Waller Anderson, born 23 January 1921, enlisted in the 105th Observation Squadron, Tennessee Air National Guard when he was just seventeen years old. He re-enlisted in the Army of the United States after the Japanese bombing of Pearl Harbor and was soon accepted into Aviation Cadet Training where he received his coveted “wings.” He then went on to the 348th Night Fighter Training Squadron in Orlando, Florida, and forward in service in WWII as a pilot in the distinguished 422nd Night Fighter Squadron. Anderson was a military photographer and this volume features hundreds of wonderful images taken by him at work and at leisure, during the years he served. Along with his personal diary, these images tell the tale of this unique young man’s experiences, and family connections.

Into The Night chronicles the military service of Lt. Col. John Anderson from enlistment in the 105th to retirement from the Air Force, highlighting his time in the 422nd throughout the European Theater of Operations in Charmy Down, and Scorton, England, Cherbourg and Châteaudun, France, Florennes, Belgium, and finally Strassfeld, and Langensalza, Germany, during which time the Germans surrendered on 5 May 1945. This memoir showcases the infamous night fighter warplane, the P-61 “Black Widow” and the 422nd NFS, the most distinguished and successful of all WWII Night Fighter Squadrons!

Into The Night is a story of valor and honor and skill, of untimely deaths of brave young men, of lifetime friendships among wartime comrades, and of a enduring love between a brave young lieutenant and his “Belgium family.” At its very least, it is the sentimental lifelong journey of a decorated WWII hero.

About the Author (written by Martyne Anderson Kostka)

My father, Lt. Col. John Waller Anderson, was born 23 January 1921. The years which he spent in the military, particularly as a pilot in the 422nd Night Fighter Squadron, shaped his entire adult life. Humility, service, devotion to family, and love of God were just a few of his many attributes.

My own life and the lives of my three daughters were enriched by “Grandaddy’s” sharp memories of his time in service. When my youngest daughter was just six years old, I can remember her telling a veteran how her Grandaddy had flown a P-61 Black Widow in the war! For us, he was our hero, and we enjoyed listening to him reminisce about his wartime experiences. He never bragged and was very uncomfortable with accolades, but he was happy to share his memories and feelings about both his comrades-in-arms and his wonderful Belgium family that he loved throughout his life.

Collaborating on this book with my father for the many years up until his passing on 6 February 2015, and then finishing it over the last two and a half years, has been incredibly rewarding, yet bittersweet. I have been so blessed by all the time spent with my father to see this project come to fruition. Also priceless was the time I spent with the remaining three Squadron members, both before and after Daddy passed. These other heroes were Louie Bost, Bob Orzell, and Roy Siegle.