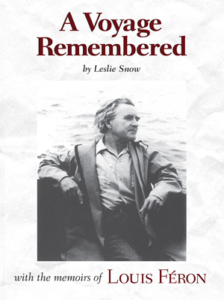 by Leslie Snow
with the memoirs of Louis Féron

This is a story of a man and a woman with vastly different backgrounds who overcame obstacles and created art and living experience. Leslie Snow was a dancer, painter, and poet. Louis Féron was a goldsmith, jeweler, and sculptor. They believed the mind and feeling must be united to be free, and to be free is the greatest quality that exists.

Art historians, art enthusiasts, and readers with an interest in the history of twentieth-century France, Costa Rica, and New York City will enjoy reading about and the notable persons and places described and will revel in the gorgeous and award-winning works of Feron that are depicted and found in the collections of the Currier Museum of Art, the Portland Museum of Art, and the Museum of Fine Arts, Boston.

Louis Féron, goldsmith-sculptor, was born in 1901 in Rouen, France. After studying in Paris at the Municipal Art School and École Nationale des Arts et Métiers, he apprenticed in workshops as a sculptor, chaser, gold- and silversmith. In 1932 he won the title of “Best chaser, gold- and silversmith of France” and was decorated by the Sorbonne commander of the Ordre du Travail. In 1935 he was appointed professor at the Public Works School in Costa Rica and organized a school of apprentices, becoming its director. During eleven years in Costa Rica, he was master of his own workshop creating sculptures, goldsmith objects, and jewelry for government, church, and private customers. In 1945 he came to New York City to create and execute art objects and jewelry on commission. His Steuben commissions include goldwork for “The Four Seasons,” “The Unicorn and the Maiden,” and “Chinese Pavilion.”

LESLIE SNOW grew up in South Orange, New Jersey and spent the years 1950-1963 performing with the Martha Graham Dance Company, the Charles Weidman Dance Company, and the Mime Theater of Etienne Decroux. She has published two other books, Leslie Snow Paintings and Drawings and Poems of Leslie Snow. She currently resides in New Hampshire. LOUIS FERON (1901-1998) was a world-class goldsmith, jeweler, and sculptor, trained in Paris as gold and silversmith winning the title “Meilleur Ouvrier de France” in 1933.

Meditations on God, Guru, Self
Scroll to top