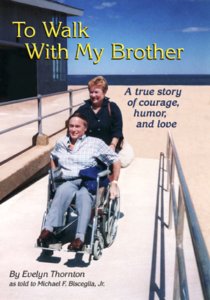 To Walk With My Brother: A true story of courage, humor and love

by Evelyn Thornton, as told to Michael F. Bisceglia Jr.

Wayne Thornton had the misfortune of becoming a paraplegic in the early 1950s, at the age of six. This tragedy became the foundation for a life that transcended the limits such a disability might have imposed. He learned to drive a car, graduated from college and enjoyed a successful career as an accountant until his death in 2011. Supported by the love of a close-knit Southern community, Wayne also inspired others to reach their goals. His eldest sister, Evelyn, shares Wayne’s story with love, humor and celebration. She lets us know just what it was like to walk with her brother.

Evelyn Thornton, the highly organized oldest child and second in command to Melba, grew up in the rural community of Carthage, Mississippi. After attending Anderson University in Indiana, Evelyn took to the skies, where, for thirty-eight and a half years, she served as a stewardess/flight attendant for US Airways. “When Wayne passed, I lost more than a brother. I lost a true friend. In this book, I have tried to capture the spirit of that admiration in under 200 pages of text. I hope I met that challenge.”

Evelyn lives in Hampton, New Hampshire, only a mile from the Shore Patio that she and Wayne helped to create. In Shiprock, New Mexico, she is known as a volunteer mother to several generations of Navajo children.

Michael F. Bisceglia, Jr., is a former educator with over twenty-five years of experience in the fields of teaching and school administration. His last six years were spent teaching children with diverse disabilities. Retired from the world of education, Mr. Bisceglia writes for several New England newspapers and magazines.

Additionally, he is the author of two novels and numerous nonfiction articles. He lives in Hampton, New Hampshire, with his wife, two dogs, and five cats.