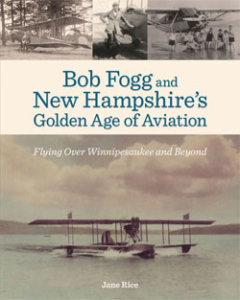 Bob Fogg and New Hampshire’s Golden Age of Aviation: Flying Over Winnipesaukee and Beyond

“Bob Fogg was not only an aviation pioneer in the state of New Hampshire, but was one of the original general aviation pilots and founder of the FBO (fixed base operator) industry in the United States. Without FBOs, and people like Bob Fogg, general aviation as we know it today would not exist. This book is an important contribution to the history not just of N.H. aviation, but also to the start of a new industry. In addition, this book vividly documents the exciting times and career of a N.H. native who truly reflected the adventurous and independent spirit of the Granite State.”

“Jane’s account of the planes and pilots who flew at the Weirs in the 1920s and 30s brings back a forgotten era of aviation on Lake Winnipesauke and around New England. No other historian has addresses this important slice of 20th century New England history. Plus, this book includes hundreds of great old airplane images.”

Here is the story of Robert S. Fogg, the Granite State’s true pioneer of aviation, which includes many previously unpublished images of airplanes and aviators of the 1920s and 1930s. Bob Fogg brought aviation to Concord and the Weirs in the early ’20s and he and his pilots introduced flying to a whole generation that grew up in that time period. For those interested in the history of the Lakes Region, it describes the seaplane base that was a prominent feature of the Weirs boardwalk from 1923 until the early 1950s, and the planes that hopped passengers from many lakeside resorts throughout New Hampshire. Classic Wacos, Travel Airs, Beech Staggerwings and Sikorsky amphibians that once plied the blue skies over Lake Winnipesauke come to life again in the pages of this fascinating history.

Thanks to her father, Lyman Rice, and his many pilot friends, Jane Rice was exposed to the antique airplane hobby from a young age. There was a grass airstrip in the back yard and a variety of old airplanes in the hangar over the years, but although she never learned to fly, she has always been interested in the historical side of aviation, starting with Amelia Earhart and other early women pilots and moving on to investigate the history of the Weirs Seaplane Base, where her grandfather flew in the 1930s. She lived on Parade Road in Laconia, New Hampshire, as a child, just up the hill from the Weirs, and some local readers may recall seeing airplanes parked in the yard where the Petal Pushers greenhouse is currently located. She graduated from Laconia High School and Nasson College in Springvale, Maine, and has worked at the Moultonborough, New Hampshire public library for twenty-nine years.

To Walk With My Brother: A true story of courage, humor and love