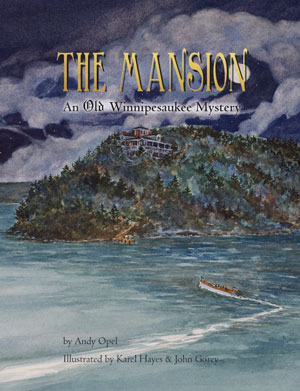 From the award-winning author/illustrator team who created The Witches and The Weirs comes the latest Winnipesaukee adventure—and this time it’s a mystery! Join Jack, Franny and J.J. as they learn about how the lake used to be and Grammy tells them a spooky story about when she was a little girl.

Join Grammy as she tells Jack, Franny and J.J. a spooky story from her childhood. The kids learn about Grammy’s grandmother, Gigi, and a long history of family adventures at the lake. Look for the clues and see if you can solve the mystery of the ghost in the Mansion.

Stilson Hutchins was born in Whitefield, N.H., and is known as the founder of The Washington Post. In 1885, he built a mansion on Governor’s Island. After years of hosting many dignitaries, including German Ambassador Baron Von Sternburg, the Hutchins family sold the house in 1920. The house fell into disrepair during the Depression, and many people believed the place had become haunted. The mansion burned to the ground in 1935.

Look for the other books in the Winnipesaukee Adventure series; The Witches, 2011 New England Book Festival Gold Medal Winner and The Weirs, 2013.

Andy Opel and his family have been coming to the lake for five generations. He is a writer, filmmaker and musician who teaches documentary video production and environmental communication at Florida State University. To see his other work visit: www.andyopel.net

Karel Hayes and her son John Gorey have collaborated on many art projects from books to murals. The Mansion is John’s second picture book and Karel’s twenty-seventh. You can see more of Karel’s work at www.karelhayes.com.

Color Me Included: The African Americans of Hampton’s First Church and...
Scroll to top