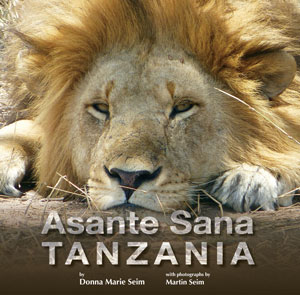 Martin and Donna’s Safari to Tanzania
by Donna Seim, photographs by Martin Seim

Finalist in the 10th Annual National Indie Excellence Awards, 2016, for Travel Book category and for Best Cover Design Non-Fiction category– “Your book truly embodies the excellence that this award was created to celebrate, and we salute you and your work.”

A beautiful coffee-table book chronicling Donna and Martin’s Safari to Tanzania, it includes Donna’s journal recordings, accountings, and various tidbits along the way! The book is filled with Martin Seim’s beautiful photography—Donna’s inspiration for deciding to publish it.

Excerpted journal entries from the jacket flap: We were told that the women collect the firewood, carry the water from the well, mind the small animals, have babies, wash the clothes, and cook the meals. Men and older boys, until they become warriors at the age of seventeen, mind the cattle. The saying “a woman’s work is never done” is a truism for the Maasai. After a wife has been married for several years and has had a number of children, she will say to her husband, “Husband it is time for a new wife!” The new and younger wife will share in the burden of the work and also the husband!

Asante Sana is Donna Seim’s first non-fiction book. She has also written the award-winning book, Charley, her second young adult novel. Her first novel, Hurricane Mia, was praised as “a 5 star young reader’s book that should be in every library, every classroom, and every home,” by Readers Favorite Book Reviews. Donna is also the author of two award-winning picture books, Where is Simon, Sandy? and Satchi and Little Star. She holds a Bachelor of Science in Social Work from Ohio State University and a Master’s in Special Education from Lesley University. Donna lives in Newbury, Massachusetts with her husband Martin, the photographer for Asante Sana, Tanzania.