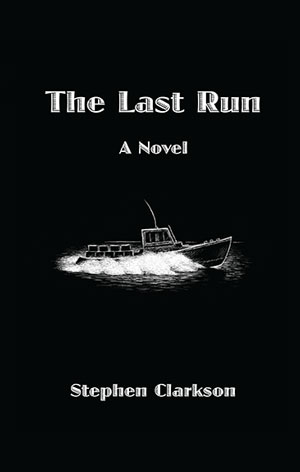 A Novel
by Stephen Clarkson

Prohibition in the 1920s is often recalled as a big-city phenomenon—speakeasies, bootlegging mobsters, the flaunting of the constitutional edict by the urban wealthy, and the tragic plight of the cities’ poor. But the Eighteenth Amendment and the Volstead Act also had a devastating—and highly dramatic—effect on everyday folks in small towns throughout the country. The Last Run is a story about that impact.

On July 10, 1929, a headline in the Portsmouth (New Hampshire) Herald announced:
Find 139 cases of Liquor Planted in Rye Harbor; Cargo Worth Between $12,000 and $15,000 Seized by Coast Guard—Thought to Have Come from Nova Scotia.

The mystery behind the origin of the liquor and the identities of the perpetrators of the crime was never solved. In The Last Run, the author imagines the story behind the story.

Stephen Clarkson graduated from Yale College and the University of Virginia School of Law. He practiced law in New York City and Washington, D.C. and was Vice President, General Counsel, and Secretary of Newport News Shipbuilding in Virginia. Now retired, he and his wife, Mary Claire, live in his boyhood home, Rye, New Hampshire. He has previously published three books, all of which are still currently available as ebooks on the Internet. His first, Patriot’s Reward, published in 2007, was a story about a slave owned by his ancestors in New Hampshire who becomes a hero in the American Revolution. In 2011 he published a biography of John L. Sullivan, FDR’s Assistant Secretary of the Treasury and Truman’s Secretary of the Navy, entitled A Different Time, A Different Man. His third, Daisy’s Song, a semi-fictional World War I story about his mother’s parents, was published in 2012. He has also written three private family biographies.