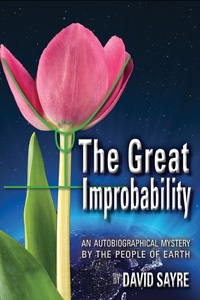 The Great Improbability
An Autobiographical Mystery by the People of Earth

Here is a groundbreaking, thought provoking mystery, in the fantasy genre. Similar to Ursula K. Le Guin’s Always Coming Home, this title was collectively “written” by the People of the Earth. Author, entrepreneur David Sayre, has reinvented our world and peopled it with characters, who are each on journeys that criss-cross and intersect in unforgettable ways. Also reminiscent of ABCs Lost television series, there is an interconnectedness here that defies an easy explanation, but let’s try.

“This is a biography of six of us–that is, six members of our family, the People of Earth. We meet our characters on a poor farm and a great estate, in a locked institution and an astronomical observatory, at the height of power and the depth of despair. Their search and their struggles are rooted in the coarsest ground of our world but reach out to the Universe. They find for us, in the grit and the stars, the least likely thing in the universe, The Great Improbability. Their story is ours.”

Two young women and four men, alone and peculiar, become entangled in deep mystery. Darwin’s evolution has run its course, and a new survival of the fittest falls into their hands. Throughout their tangled stories, the rough hand of entropy wrestles with the gentle hand of God for the people’s survival. They are we. Each carries their own mystery, which gradually flows into one.

Meaghan Leary, an abused young woman, pulls herself out of poverty and discrimination to control all around her, but her quest for power pushes Thomas Cabot Brigham III, Esq. into criminal insanity. An autistic mathematician named David, and his mechanical partner whom he names Ami, struggle together to develop “feeling.” Aldo Marconi, a fugitive scientist, strives to decode enigmatic patterns received by his radio telescopes. Timothy Maloney, the glamorous scion of a famous political dynasty, confesses a secret and searches for those he has exploited.

Their stories mingle in the Pentagon and in hospitals, in exclusive clubs and poor farms, prisons and law firms, ghettos and campuses, a laboratory and a cathedral and a reservation—places of great beauty and desolate abandonment. They meet in passion, in fear, in violence and confusion, in fulfillment and in guilt. Aspiring for love, seeking beauty, trying to find meaning and identity, they advance toward a rational faith, finally together.

The two faces of entropy resolve in beauty. And the things we hold sacred are real, after all.

Also by David Sayre: Something There Is

David Sayre is a father of five children and five businesses, and has been chairman of many non-profit organizations. These have led him to the unusual places and encounters from which these letters are written. An engineer and entrepreneur, the author has led advances in the technologies of telecommunications and energy services for thirty years. He is the author of Flatland (Two Little Birds, 2014), a children’s book illustrated by Rebecca Emberley. Visit the author website: davidsayre.com