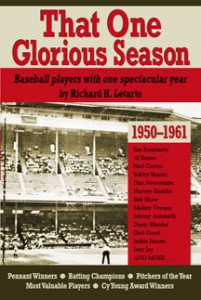 That One Glorious Season

“This book is dedicated to the ballplayers of the mid-twentieth century who were the heroes of so many youngsters who grew up during that time. They were an eclectic, colorful group who, in their own way, encouraged many of us to strive to achieve our goals, whatever they were. Thank you.”

“Rich Letarte wins Author Rookie of the Year Award with That One Glorious Season.”

—Dan Shaughnessy, sports columnist for the Boston Globe and author of The Curse of the Bambino and five other books.

“. . . A must-read for those enamored with our national pastime. Rich Letarte draws a warm and vivid portrait of the time when baseball ruled the sporting world. This fond remembrance entertains and informs with magical observations and fascinating tales. “

“Wow! Suddenly, I’m ten years old again. A well-researched, wonderfully-written, treasure trove of baseball heroes of the 1950s and early ’60s, highlighting their miracle performances. The book was fun and enthralling; the pages kept turning and turning. I truly enjoyed That One Glorious Season.”

—Calvin S. Fisk, standout athlete at the University of New Hampshire in baseball and soccer and a member of its athletic Hall of Fame. Older brother of Carlton Fisk, who was inducted into baseball’s Hall of Fame in 2000.

Throughout his life, Rich Letarte has been a student of baseball history. His particular focus has been the years immediately prior to expansion. By day, he is a Certified Public Accountant in Leominster, Massachusetts, and lives in nearby Lunenburg with his wife of many years, MaryEllen. They have three children and three granddaughters. Author Website: gloriousseason.com

Poet On Demand: The Life, Letters, and Works of Celia Thaxter
Scroll to top