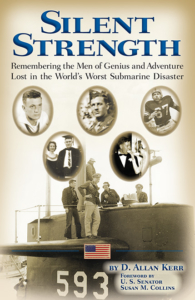 Contact:www.threshermemorialkittery.sharepoint.com
D. Allan Kerr is a member of the Thresher Memorial Project Group. He may be contacted by e-mail at: the_culling@hotmail.com

“A poignant compendium of articles from Seacoast Onlineand the Portsmouth Herald by D. Allan Kerr provides touching portraits of those who served and never returned from the loss of USS Thresher. . . . Kerr demonstrates that even a half-century later we have not forgotten, and this book will help maintain those somber memories in our collective conscience.”
— David F. Winkler, Ph.D., Program Director, Naval Historical Foundation, Washington Navy Yard, DC.

“More than 50 years after the tragedy, if you listen carefully you can still find people arguing about how the loss of Thresheroccurred. . . . Stories are the fabric of our society and D. Allan Kerr is a master storyteller. I strongly recommend that you read his fine book to learn more about Thresherand her magnificent crew!”
— Peter B. Bowman, Captain, USN (Ret), former Portsmouth Naval Shipyard commander and Maine state senator

“. . . It is well known that Thresherwas at the forefront as a deterrent to the Soviet Union during the Cold War. However, Kerr shows us another dimension to the men of Thresher—the American spirits of character, morality, and integrity. . . . Kerr has reminded us to never forget those on Eternal Patrol.”
— Bruce Harvey, son of Lt. Cdmr. John Wesley Harvey, last commanding officer of USS Thresher(SSN 593)

“Through D. Allan Kerr’s well-researched and well-written Silent Strength, readers encounter many outstanding and gifted officers and crew of the USS Thresher. . . . With interviews and photographs [from] the families of the lost submariners, Kerr captures most vividly the lives and achievements of this remarkable group of men. Their sacrifice ushered in an improved and safer Navy. . . . the men of the Thresherstill live. Kerr’s book preserves this proud legacy.”
— Richard E. Winslow III, author of “Portsmouth-Built”: Submarines of the Portsmouth Naval Shipyard; “A Race of Shipbuilders”: The Hanscoms of Eliot, Maine, and several other Portsmouth Marine Society titles.

D. Allan Kerr’s own stint in the U.S. Navy was highlighted by four years of sea duty aboard the amphibious assault ship USS Guam(LPH 9), which participated in the invasion of Grenada and two tours off the coast of Beirut. He has since been employed as a dishwasher, deckhand, road crew laborer, factory worker, and newspaperman. He spent seven years unloading lobster boats on northern New England docks, including two years on an island off the Maine coast. He is currently employed by the U.S. Treasury Department.
Kerr graduated magna cum laude from the University of New Hampshire and earned his master’s degree from the school’s graduate fiction program. He resides in Kittery, Maine, with his amazing wife Nicole, and between them they have four challenging and remarkable children spanning two decades.

“On April 10, 1963, the submarine USS Threshersank off the New England coast. The loss of 129 officers, sailors, and civilian technicians was a tragedy for the Navy, our nation, and especially for the families of that gallant crew. The USS Thresherwas built in Kittery, Maine, at the Portsmouth Naval Shipyard. Each year, the people of Kittery and neighboring communities in Maine and New Hampshire gather on the anniversary of the loss of the Thresherto pay their respects to those who made the ultimate sacrifice in defense of our nation.

“The brave patriots who perished on the USS Thresherwere memorialized not just with everlasting granite, but also with powerful words. The compelling series of articles published by Seacoast Online and the Portsmouth Herald during this solemn anniversary year that form this remarkable book tells powerful stories that will never be forgotten. With its title taken from the USS Thresher’sofficial motto, Silent Strengthis at times heartwarming, often heartbreaking, and always inspiring.”
— From the Foreword by U.S. Senator Susan M. Collins

Something There Is: Seeking a Rational Faith for our Children