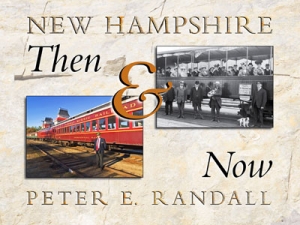 New Hampshire native, and award-winning photographer, Peter E. Randall captured changes in cityscapes and landscapes. The 80 sets of images presented provide an important historical record contrasted with a contemporary artistic vision of New Hampshire and its people. Using the archives of the New Hampshire Historical Society, local historical organizations, and individuals, Randall selected the vintage photographs and recreated their contemporary equivalents. Also an historian, Randall included historical data for each photograph. It’s a perfect keepsake title for anyone who loves New Hampshire.

With over forty-five years of experience, Peter E. Randall is one of New Hampshire’s best known editorial photographers. He is the author of fourteen books, nine of which feature his photographs. New Hampshire Four Seasons (1979) was the first published book of New Hampshire color photographs. He has also published photo essays on Portsmouth, New Hampshire, and Newburyport, Salem, and Marblehead, Massachusetts, as well as two volumes on the Isles of Shoals.

A native of the New Hampshire seacoast, Peter E. Randall is the twelfth generation of his family to live in the region. He has been involved with publishing since graduating from the University of New Hampshire as a history major. Before he began his own publishing company, he was editor of a weekly newspaper, and for seven years edited New Hampshire Profiles Magazine. Since 1974, he has authored 14 books ranging from collections of photographs and travel guides, to local history.

Silent Strength: Remembering the Men of Genius and Adventure Lost in the World’s...