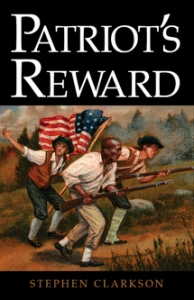 The time is 1755, over a hundred years before the American Civil War. The place, the British royal province of New Hampshire, far north of King George III’s southern colonies in Virginia and the Carolinas with their extensive plantations maintained by scores of African slaves.

During the next thirty-five years the white residents of this northern region will have their freedom challenged, take up arms to preserve it, and, along with the twelve other Atlantic seaboard colonies, seek to establish a new government of their own that will treat them fairly and equally.

In the same period a young African enslaved in Portsmouth, New Hampshire, chafes at his bondage and embarks on his personal struggle to attain the same freedoms sought by his white owners. He fights in the same war in the name of the same lofty principles.Maybe it was a mistake.

Stephen Clarkson is a direct descendant of Will’s original owner in America. He graduated from Yale College and the University of Virginia School of Law. He practiced law in New York City and Washington, D.C., and was Vice President, General Counsel, and Secretary of Newport News Shipbuilding in Virginia. Now retired, he and his wife, Mary Claire, make their home in Rye, New Hampshire, where he lived as a boy. Patriot’s Reward is his first novel.

A Different Time, a Different Man: The Story of John L. Sullivan