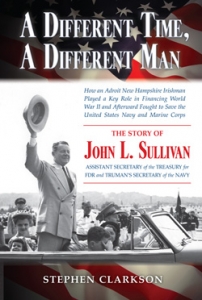 A Different Time, a Different Man: The Story of John L. Sullivan

“Clarkson’s excellent book recalls a time when politicians on both sides of the aisle and the executive branch worked together successfully in the nation’s best interests notwithstanding philosophical differences or personal detriment.”

“A Different Time, A Different Man is a compelling and well-researched biography of John L. Sullivan, a man who demonstrated both during his time at the Treasury Department and later at the Navy that, in government, financial discipline and national security are not incompatible pursuits.”

—Charles A. Bowsher, Assistant Secretary of the Navy, (Financial Management and Comptroller, 1967-71); Comptroller General of The United States, 1981-96

Covering an important segment of twentieth-century history, this is the first biography of John L. Sullivan, Assistant Secretary of the Treasury for FDR and Truman’s Secretary of the Navy, portraying how this extremely capable New Hampshire Irishman played a key role in the financing of World War II and then fought after the war to preserve a strong Navy and the Marine Corps.

Stephen Clarkson is a graduate of Yale and the University of Virginia School of Law. He practiced law in New York City and Washington DC and was Vice President and General Counsel of Newport News Shipbuilding in Virginia. He previously published an historical novel entitled Patriot’s Reward, a story about a slave owned by Clarkson’s ancestors who fights in the American Revolution.