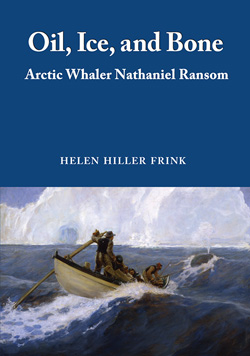 “Nathaniel Ransom “in plain and forthright language. . . he makes a historic event come alive with the honesty of his comment.”

At fourteen Nathaniel Ransom embarked on the first of his four whaling voyages, following his older brothers to the chase after sperm whales, right whales, humpbacks, California gray “ripsacks,” and mammoth Arctic bowheads. Sailing the globe’s oceans from the Beaufort Sea to the South Pacific, he longed for his Darling Sarah, left behind in Massachusetts. His journals faithfully record weather, winds, whales, and sails, interspersed with personal insights. He survived the worst whaling disaster in the history of the New England fleet, when captains and crew abandoned thirty-three vessels, trapped and crushed by drifting ice, off the Alaskan coast. Ransom’s eyewitness account of his four voyages depicts in rich detail whaling’s brutal slaughter and sudden losses. His engrossing story opens a window on the life of an ordinary whale man during the heyday of the Arctic bowhead hunt.

Helen Frink is descended from two families of Yankee whalers. When she left her family’s farm in Newington, New Hampshire, and made her first voyage, her mother told her never to fear seasickness, for she had salt water instead of blood in her veins.

She holds a bachelor’s degree in English from the University of New Hampshire, and master’s and doctoral degrees in German from the University of Chicago. She is the author of two town histories: These Acworth Hills (1989) and Alstead Through the Years (1992). Her book Women after Communism; the East German Experience (University Press of America, 2001) examines the effects on women of the transition from socialism to capitalism.

After three decades teaching French, German, Women’s Studies, and Holocaust Studies, she retired from Keene State College as Professor Emerita of Modern Languages. Her exploration of family history brought her to the journals of great-grandfather Nathaniel Ransom. She delights in using original letters, newspapers, journals, and documents to bring to life social and material history centered in New England. She lives too far from the sea in Acworth, New Hampshire.

Across the Tracks: An Immigrant’s Journey; Anthony DiNardo
Scroll to top