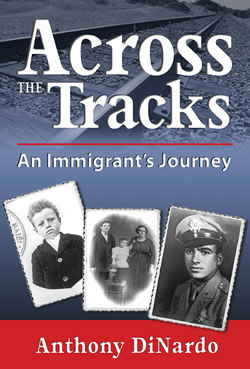 An Immigrant’s Journey
by Anthony DiNardo

DiNardo describes in ­detail his early life as a child in Italy and his youth in America during the depression. He depicts his war time military service with the 380th Bomb Group of the U.S. Air Force while in the South Pacific. He narrates his extraordinary experiences confronting responsibility for the lives of others, danger, fear, cowardice and death.

DiNardo offers a powerful personal story of living the American Dream while alerting the reader to troubling trends. Readers will be engrossed by the rich characterization and portraits of the many diverse people he knew during his lifetime.

Tony DiNardo was born in Italy and immigrated to America eighty-five years ago. He lived through the Great Depression of the 1930s, fought in World War II and retired as a major from the U.S. Army Air Force.

Recognizing education was essential; he earned a chemistry degree from the University of Pittsburgh followed by a law degree from Duquesne University.

DiNardo had a successful business career as a corporate exec­utive concentrated in human ­resources, leveraging his unique experiences and insight into human behavior and interrelationships. Married to his beloved Elly for ­sixty-two years, his family extends to four children, nine grandchildren and, to date, three great grandchildren. Having settled in New England since his early business career, he currently resides in Bedford, New Hampshire.

Prelude, A Novel, & The 1854 Diary of Adeline Elizabeth Hoe
Scroll to top