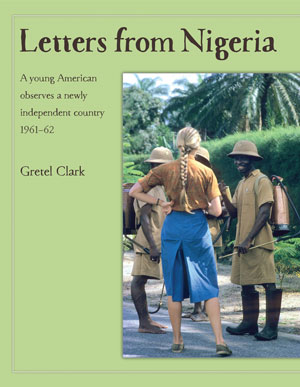 “An extraordinary account of an idealistic young couple changing the world in newly-independent Nigeria in the early 1960s. The Introduction and Afterword frame the experience in terms of the motivations, hopes, and longer-term careers of these extraordinary young people. The letters to home, accompanied by a wealth of photographs, offer an immediate response to the experience of living in a very different culture and environment, of the swirling ideological currents in a young country casting off imperialism, but being enmeshed in cold-war rivalries of the international system. The insights into international aid, diplomatic, and non-governmental programs, organizations, rivalries, and effectiveness are insightful and immediate.
The other side is the intensely personal discoveries of a new and unfamiliar culture. The interplay between the various expatriate communities is fascinating, and the clash of cultures between Colonial Civil Servants, international actors, foundations, and the arrival of the Peace Corps is described in immediate detail. Finally, the impact of this experience on this vibrant young couple, culminating in the birth of their first child, is related beautifully in these Letters from Nigeria.
This book should be must reading for those of us who shared in the excitement of trying to facilitate development in the newly-independent countries in those heady days. It should also be must reading for the next generation of young people who want to be involved and make a difference in the developing world. The frequently frustrating conflict between aspirations and hopes and reality are laid bare, yet an underlying optimism and belief that progress has been made persists.
I couldn’t put the book down until the very last paragraph.”

“Letters from Nigeria is a delight. Nigeria, brash and proud, was brand-new in 1961. So were Gretel and Peter Clark, engaged as wide-eyed expatriates in novel, unpredictable, immersive explorations of their host nation and themselves. These infectiously charming letters home provide an unexpectedly telling, immediate, commentary on Africa’s largest country before it lapsed into cynicism, corruption, and civil war. Clark writes of a Lagos, which will never be recaptured.”

Impressions and images of a young American couple going to live and work for the government with economist Wolfgang Stolper in West Africa sixty years ago.

A young American joins her husband on a pre–Peace Corps mission to newly independent Nigeria: she to work in the Ministry of Education, while he joins a team of economists sent by the Ford Foundation. Gretel’s letters home give an inside view of the fledgling government. Full-color slides bring alive the vibrant cultures of the new nation.

Life among British civil servants, visiting foreign diplomats and speculators, and daily interactions with the Nigerian people are the heart of this story. Included in Clark’s anthropological musings, and economic development theories, is the birth of her first child in a West African government hospital.

GRETEL CLARK has a BA from Vassar College, an MA from University of Michigan, and MA/CAS from Harvard University. She has taught on four continents and raised four children while serving the Massachusetts State Department of Education for fifteen years as Bilingual Specialist for its northeast region. She led her town to create the first weekly curbside composting program east of Michigan, and has been a long time beekeeper in her home town, Hamilton, Massachusetts.