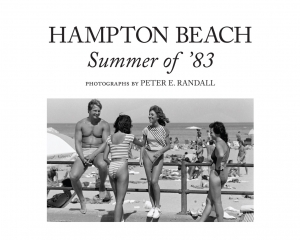 Peter E. Randall created this title as a catalog for a photography exhibit entitled, “Hampton Beach, Summer of ’83.”

This exhibit opened at the Lane Memorial Library in Hampton, NH in July of 2019, and then moved to The Randall Gallery, at the Portsmouth Athenaeum in Portsmouth, NH, in February of 2020.

“Although I grew up in the New Hampshire Seacoast, I never spent much time at Hampton Beach, at least not the two-mile section where most of the tourists go,” Randall said. “In 1983, I was living in Hampton, so it was easy for me to get to the beach any day or time of day. With my little camera (an Olympus XA), I wandered the broad, sandy beach, the boardwalks, the sidewalks and the arcades. Almost no one noticed me working and none of the people who did see me objected to being photographed.”

Randall, a professional photographer since 1963, said the beach project was inspired in part by Henri Cartier-Bresson (1908-2004), who used normal or slightly wide-angle lenses to take street photographs, “looking for possibilities when composition, subject, interaction between people and their surroundings came together for a meaningful image.”

Randall may have started out to make art, but he ended up having fun.

“Sand and surf. Babes in bikinis and babies in diapers. Muscular teenagers and spry golden-agers,” he wrote about his work in a blog for Red River Paper.

He shot the photos in black and white, using a film by Agfa that could be processed anywhere.

“You know, how you used to drop your rolls of film off at the drug store to be developed,” Randall said, noting the film has a fine grain with a wide exposure latitude.

By Labor Day, he had taken more than 700 pictures. He had the film developed, made contact sheets, and filed it away.

“I was starting my publishing business that year, and had begun a history of Hampton,” he said. “I had other things going on. Hampton Beach was mostly forgotten until last winter (2019) when a friend was helping me archive my work.”

The rediscovery of the photos led to an exhibit last July at Lane Memorial Library in Hampton. At the opening, a woman approached Randall and told him she was in the cover photo.

“I didn’t even get her name, because there were so many people there. The library told me that at least a couple of people came in later and said they were in my book,” he recalled.

The exhibit in the Athenaeum’s Randall Gallery (named for him), included 30 of the book’s 70 images.

As the founder of Peter E. Randall Publisher, he has produced some 450 titles of local history, poetry, fiction, memoirs, art and photography. He has also authored 13 books of history, photography and travel. The Isles of Shoals is a particular interest of his, and the subject of two books of photographs and a film, “Celia Thaxter’s Island Garden.”

But that summer of street photography on Hampton Beach stands out in his memory.

“It’s got to be the busiest place in New England for the amount of space it takes up,” Randall said.

Peter was named a “Red River Pro,” and as a result is able to use Red River’s wonderful archival printing papers. All images in the exhibit were printed with Red River’s Ultra Pro satin paper.

Peter uses Red River paper for his prints and is a Red River Pro.

Students Should Not Miss a Day: The Proud History of Education in Lee, New ...