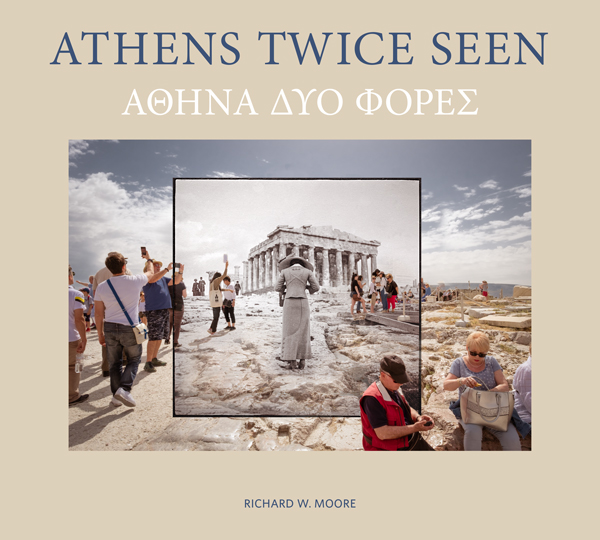 Early in the 2000s, Moore began making “twice-seen” images, with vintage and contemporary photographs, merging surrealism and history. This title features combined photographs of historic monuments and areas of Athens, and was sponsored by The Hellenic American College and the NH Institute of Art.

“Moore’s dual photographs—images of Athens from the previous century paired with corresponding contemporary photos shot from the same spot—open up before our eyes a fascinating window to memory, stirring a moving sense of intimacy at the sight of well-known and beloved sites across the city. It is the spirit of Athens itself that is represented in Moore’s photographs, which prompt us to take another look at the city, or “see it twice.’” —Leonidas Phoebus Koskos, President, Hellenic American University.

Richard W. Moore studied studio art and art history while receiving a B.A. in English from Yale University, buttressed later by an M.Div. from Union Theological Seminary and an M.A. in non-fiction writing from the University of New Hampshire. He learned photography from many fine photographers, including Neil Maurer (later of San Antonio) and Paul Caponigro, then teaching in Danville, Connecticut. Visit his website at www.richardmoorephotography.com to enjoy a portfolio of his images and to learn more about his work.