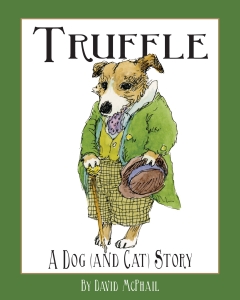 A Dog (and Cat) Story

This is the story of a little dog who had difficulties with cats, until the day that everything changed.

Truffle, a small dog, was born and raised on a farm, where he was put in charge of keeping the rats out of the barn, and the badgers out of the fields. Truffle enjoyed his work, and he took pride in doing it well. The only difficulty he had was with cats.

Nothing irritated Truffle more than the sight of a cat sleeping on the job while the mice ate their fill in the corncrib. Truffle would howl loudly, waking the cat, which then would dash off with Truffle close behind!

He never actually caught the cat, and he would not harm it if he did. It was all about the chase.

Truffle enjoyed his work, but he felt that something was missing in his life. So, he left the farm to search for those missing pieces.

About the Author and Illustrator

David McPhail is a beloved author-illustrator of more than 200 books for children including best-selling picture books, board books, and novelty books. He received a New York Times Best Illustrated Books honor for Edward and the Pirates. He has also received a Boston Globe-Horn Book honor, a Children’s Choice Award, a Parents’ Choice Award, a Children’s Booksellers Choices Award, a Best Books of the Year award from Publisher’s Weekly for Mole Music, and many state awards. He lives near the sea in New Hampshire with his wife Jan Waldron. His website is https://www.bugleboypress.com/, named for his new imprint, Bugle Boy Press.