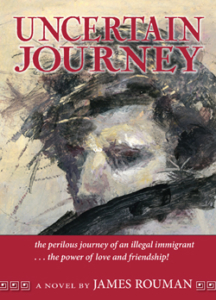 Uncertain Journey
the perilous journey of an illegal immigrant . . . the power of love and friendship!

“Writing with a limpid prose and a shrewd sympathy for his characters, Rouman finds universality in the travails of an iconic outsider. A subtle, absorbing portrait of the immigrant experience.”

“Uncertain Journey puts a face on illegal immigration through the telling of the perilous journey of a young Albanian who seeks a new life in America. It is a tale of the power of love and friendship as well as the competing power of prejudice based on personal, ethnic and political histories. The author also subtly reminds us of the amnesia of past immigrants in viewing the newly arrived as they wrestle with finding their place. It is a timely book as the nation struggles with a burgeoning population of illegal aliens.”

“In our society, immigration—particularly illegal immigration—is discussed as if it were a theoretical issue, that is, as if it did not involve real people in real places doing real things. By centering his novel on an Albanian and giving him a background rather different from one most Americans expect an illegal immigrant to have, the author makes room for the human element—making it something of a love story. The point is that while the novel is “about” illegal immigration in some sense, that is not all that it is about.”

“What sets Rouman’s novel apart is his insight into immigrant life in small town America . . . A laudable effort . . . an interesting addition to the literature of the Greek-American immigrant experience.”

“The characters in Underwater Dreams, and the depth of their feelings for one another remain in my head and heart. I suspect they’ll be there for a long time.”

James Rouman was born and raised in Tomahawk, Wisconsin. Following service in the navy during World War II, he graduated from Northwestern University Medical School and worked for a year as a ship surgeon before specializing in anesthesiology, which he practiced at a major tertiary-care center in Connecticut. The author’s first novel, Underwater Dreams, (Peter E. Randall Publisher, 2006) was warmly received.

The River in Your Town