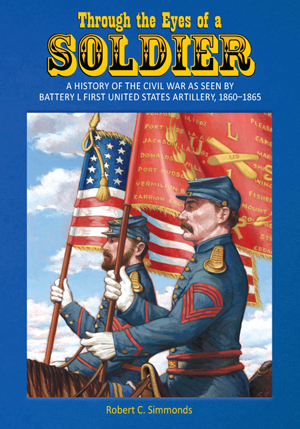 The proceeds from the sale of this title will be used to support Civil War battlefield land acquisition, and historical sights and education

Through the Eyes of a Soldier

A History of the Civil War as Seen by Battery L First United States Artillery, 1860-1865 by Robert C. Simmonds

Advance Praise for Through the Eyes of a Soldier

“Written histories of the Union artillery batteries that took part in the Red River Campaign of 1864 are scarce… Simmonds helps fill this void and provides researchers as well as Civil War enthusiasts with a valuable reference work.”

This book is based upon the extensive service record of Battery L, a part of the “Old Army” – the Regulars.

In 1860, Battery L was a part of a contingent of 2,684 U. S. troops stationed in Texas. By early 1861 secession sentiment had reached the tipping point and the whole U. S. contingent were surrendered to the Texas commissioners two days after that state seceded on February 16, 1861. Escaping, Battery L was sent to Fort Pickens, off Pensacola, to resist its seizure by the Florida militia. Pickens was held, but a long standoff had begun. Almost all of the coastal forts like it, most notably Sumter, off Charleston, fell to the Confederacy. At that early time, the Confederacy viewed pushing the Union from its soil as a necessary projection of its power, and as a defense of its new realm, which included the Mississippi River and the Tennessee Line in the north.

It was not long, however, before the bold actions of an unknown brigadier by the name of Grant captured the two essential forts in the Tennessee line, causing the Confederacy to abandon the coast and head to the defense of the Mississippi Valley.

Battery L “saw” most of the subsequent action there, and after Grant was promoted to lieutenant-general, effectively giving him control of the entire Union war effort, they were shipped to yet another valley – the Shenandoah, to fight in the battles that led to the end of the war.

Be Nice to the Weather Guy, Josh Judge; illustrated by Ginger Nelson