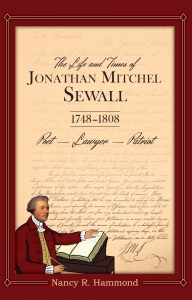 The Life and Times of Jonathan Mitchel Sewall

Jonathan Mitchel Sewall lived from 1748–1808. He was known as the poet of the American Revolution, and as a lawyer and a patriot, he advanced the cause of freedom, denouncing slavery in his creative works, as well as in his legal practice. He was born in Salem, Massachusetts, educated at Boston Public Latin School, then he came to Portsmouth, New Hampshire. The rest is extremely interesting history.

“J. M. Sewall was a remarkable person: an acclaimed patriot in the age of America’s first great patriots; an admired thinker and writer in the heart of the Age of Enlightenment; and a burgeoning romantic in the dawn of the Romantic Age. He was the epitome of a man of his day, yet he is barely remembered, even in his native town in New Hampshire. Nancy Hammond has reanimated his dust in a marvelous work that is serious history, powerful biography, and a bit of a whimsical fan letter to a celebrity with a faded star. If you read this book, Nancy will make you a fan too.”

“Jonathan Mitchel Sewall is no more. And the once-celebrated New Hampshire poet might have stayed that way had researcher Nancy Hammond not purchased Sewall’s ancient house on Portsmouth’s historic Gates Street. Or was it his house? Driven to exorcise the ghost of Mr. Sewall, Hammond has exhumed an astonishing cache of fragments that are worshipfully woven into a vivid portrait of the man and his times. No one loved George Washington more than Jonathan Sewall, whose odes were sung to the president himself in the streets of Portsmouth in 1789. And no one will ever love Mr. Sewall more than this hard- working biographer.”

“I was excited to find your description of Primus (the enslaved Black man who worked for the New Hampshire Gazette) as a person, as opposed to the usual caricature.”

“What an adventure you have had! Your interest in Sewall has led you to all corners of New Hampshire, to many unexpected (by me) corners of the Atlantic community, and to the acquaintance of scores of wonderful people from New England history, some of whom were only names to me and now are living, speaking human beings.”

Nancy Hammond graduated from Miami University in Oxford, Ohio with a BA in French and from Western Reserve University with an MS in Library Science. She worked as a cataloguer at the Harvard University School of Higher Education and completed the coursework for an MA in Education. While working as Head of Circulation at Baker Library Harvard Business School she exchanged jobs with a British librarian and then moved to England in 1972. There she worked as Tutor librarian at Hatfield Polytechnic, Library Education Officer at the Polytechnic of North London, and Lecturer at Brighton Polytechnic Library School. While living in Northumberland after retirement she was involved with the Bailiffgate Museum in Alnwick researching houses and the people who lived in them in that town. She bought a house jointly with her sister in Portsmouth, N.H. in 2003, moved there permanently in 2018 and became involved with a committee researching local properties for Portsmouth’s 400th anniversary in 2023. She is a volunteer at the Portsmouth Athenaeum where she is now a Proprietor, and at the Strawbery Banke Museum. Also, she is a member of the Portsmouth Historical Society, the New Hampshire Historical Society, and the New England Historical Society and subscribes to American Ancestors, Genealogy Bank, Ancestry and Find My Past. Her research into the life of Jonathan Mitchell Sewall began with the purchase of the house in 2003 and she has written his biography during the pandemic as well as creating a Google Site of historic properties in the South End of Portsmouth.

ALL JOIN HANDS
Scroll to top