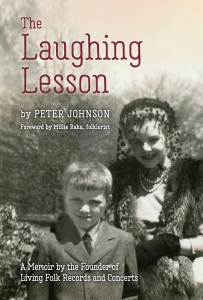 The Laughing Lesson: A Memoir by the Founder of Living Folk Concerts and Records

From the Foreword, by Millie Rahn

Long before I came to Cambridge, I’d heard about a legendary fellow there who ran informal folk concerts in places like graveyards that today would be called ‘pop-up’ venues. This was during the mid-20th century folk revival when new communities gathered around singers of traditional songs and players of jigs and reels. I soon learned that the legendary fellow’s name was Peter Johnson and that he had started Living Folk Concerts (and later, Records) about a decade before. I also heard that he was a “character,” but a character who knew instinctively the power of music and culture. Like a moth to the flame, I gravitated to these gigs. Over the years, Living Folk audiences grew and moved with Peter to ever larger venues as he brought over soon to-be-stars like Clannad from Ireland and Silly Wizard from Scotland. After Living Folk ended as an organization, Peter continued to host ceilidhs and hoots at pubs and coffeehouses in Boston and Cambridge.

“Since first arriving in Boston in 1980, Peter Johnson was for me an important part of the zeitgeist of the city. His commitment to promoting folk and traditional music was always full on and often quirky. His effort contributed in a very significant way to the creation of a uniquely Boston musical atmosphere that is still enjoyed today. In The Laughing Lesson, Peter perfectly and often hilariously describes the bifurcated world he occupied, juxtaposing often absurd Brahmin formality with his endless variety of colorful characters in a ragamuffin Cambridge. At times, when reading it, I felt I was in the Plough and Stars having a pint with all of them.”

“Everybody likes to get a glimpse at how ‘the other half’ lives. No matter what your life history is up to this point, this book will give you an entertaining look at a life you’ve never experienced. More importantly it is a story of transformation as Peter goes from child of Newport and Boston privilege to Cambridge Bohemian in literally a turkey suit to become a champion and tireless promoter
of folk music. That’s working-class music, the music of the poor.”

“It has been a great pleasure to know Peter for over fifty years, singing in his concerts, listening to the records he produced, and watching his boundless enthusiasm for all kinds of traditional music. His encouragement and support have introduced many musicians, singers, and bands to wider audiences, and those audiences have benefited from his efforts, knowing that if Peter was involved, the music would be worth listening to.”

Author Peter Johnson is a singer, actor, promoter, producer, folklorist, and the founder of Living Folk Records and Concerts. He’s been a fixture in the traditional music scene since the mid-twentieth century folk revival, growing up at Ridgemere, an estate in Newport, RI, but then finding his own way to Cambridge, MA, and a creative life full of the joy of music, story, and theatre. Living Folk introduced traditional artists such as Clannad from Ireland and Silly Wizard from Scotland to New England audiences, thereby helping to launch their US careers. This illustrated memoir shares Peter’s incredible life story for the first time.

Bella and Jingles
Scroll to top