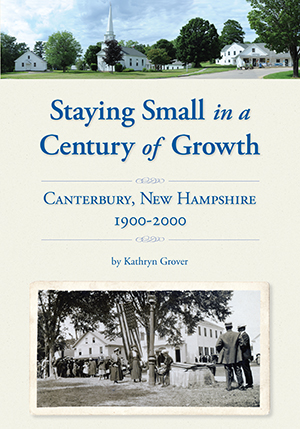 Staying Small in a Century of Growth: Canterbury, New Hampshire, 1900-2000

A Small Town Transforms, Grows—and Endures. At the beginning of the twentieth century, Canterbury, New Hampshire, was an agricultural town with a declining population, grouped in farm-based neighborhoods with one-room schools, poor roads, and different religious affiliations, including a Shaker village. Unaffected as yet by the automobile and the telephone, residents tended to live and work within a small distance of their homes.

The devastating effects of a great fire in the town center during World War II signaled a change in the town’s identity that took hold over the second half of the century. A rise in population blended with an agricultural past to create a new identity as a residential community wishing to retain and preserve its rural quality.

Through the decades, Canterbury retained a distinct sense of self, embodied in a can-do spirit that continues to bring residents together around projects and traditions big and small. This twentieth-century history is an example of that self, involving community fundraising and the time and talents of more than two hundred people.

Kathryn Grover is an independent researcher, writer, and editor in American social, ethnic, and local history. She is the author of Rochester, New Hampshire, 1890–2010: “A Com­pact Little Industrial City” (2013), The Brickyard: The Life, Death, and Legend of an Urban Neighborhood (2004), The Fugitive’s Gibraltar: Escaping Slaves and Abolitionism in New Bedford, Massachusetts (2001), Lynn Album II: A Pictorial History (1996), and Make A Way Somehow: African-American Life in a Northern Community (1994). She lives in Windsor, Vermont.