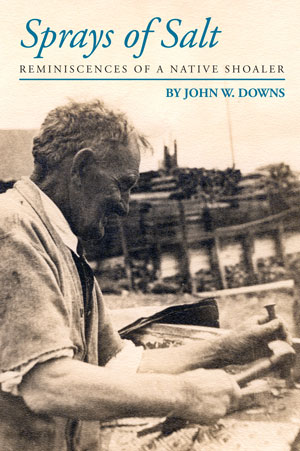 Reminiscences of a Native Shoaler
by John W. Downs

Sprays of Salt was published in 1944 by John W. Downs, one of the only native Shoalers to recount every day living on the Isles of Shoals during the latter decades of the nineteenth century. Down’s grandfather, John Bragg Downs, was the last of the “Old Shoalers” to inhabit Star Island, holding onto his property until the town of Gosport no longer existed.

Growing up on the Isles of Shoals, the son of many generations of seafaring fishermen, the author retells many an adventure and historical event, both on the islands and on the sea. Tales of swordfishing, lobstering, romping with Indian children, and life as one with the sea are told alongside the more famous stories of shipwrecks, pirate treasure, and murder.

In Sprays of Salt, Downs also includes some family genealogy, especially that of the Caswell, Downs, Foss, Spinney, and Odiorne families. In addition, his life-long interest in, and connection to, the Portsmouth and Piscataqua region is evident as he knowledgeably relates this history of the area.

This rare, first-hand account of a native shoaler was originally reprinted with additions in 1997. Due to an unfortunate warehouse fire, many volumes were lost. This 2016 edition includes several previously unpublished items, including photographs, proclamations of marriage intentions, and a hand-colored map of the islands. Also included is an introduction by the author’s great-granddaughter.