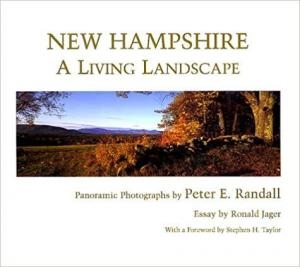 This is a spectacular, large format, 96-page hard cover book featuring 46 color panoramic images by one of New Hampshire’s leading photographers. Most of the photographs span two pages and measure 21″ x 7″.

According to the Society for the Protection of New Hampshire Forests, “Technically and artistically, these are among the most striking images ever made in the Granite State — from the Seacoast to the North Country. They express perfectly the qualities that make our state special, from forested wilderness areas to historic buildings and stone walls.” The book has been in progress since 1991, a project that required Randall to drive thousands of miles across New Hampshire to record scenes in all seasons, especially the spectacular fall foliage for which the state is so famous.

As New Hampshire Commissioner of Agriculture Stephen H. Taylor writes in his foreword, “Peter Randall brings to his New Hampshire photography a deep affection for and keen understanding of the state, its natural environment, and the idiosyncrasies of its people and culture. “The photographs in this book reflect the diversity and complexity of the state’s landscape, and especially the fascinating interplay of forests, fields, waters, and built features that make the New Hampshire countryside so appealing.”

Publication of this book was made possible through a generous grant from Fisher Scientific International, Inc., of Hampton, in cooperation with the Society for the Protection of New Hampshire Forests.

With over forty-five years of experience, Peter E. Randall is one of New Hampshire’s best known editorial photographers. He is the author of fourteen books, nine of which feature his photographs. New Hampshire Four Seasons (1979) was the first published book of New Hampshire color photographs. He has also published photo essays on Portsmouth, New Hampshire, and Newburyport, Salem, and Marblehead, Massachusetts, as well as two volumes on the Isles of Shoals.

A native of the New Hampshire seacoast, Peter E. Randall is the twelfth generation of his family to live in the region. He has been involved with publishing since graduating from the University of New Hampshire as a history major. Before he began his own publishing company, he was editor of a weekly newspaper, and for seven years edited New Hampshire Profiles Magazine. Since 1974, he has authored 14 books ranging from collections of photographs and travel guides, to local history.

2019Counter Culture: Clams, Convents, and a Circle of Global Citizens
Scroll to top