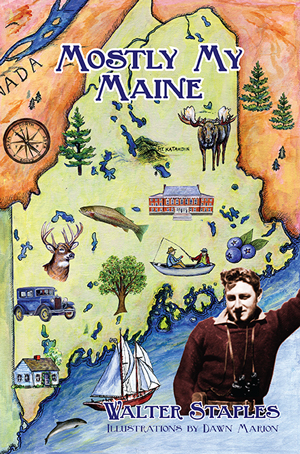 Walter was born and raised in rural Eliot, Maine, in the first half of the 20th century. In Mostly My Maine he tells of his youth in Eliot, family, friends, and neighbors. He knows how to tell a good story and brings us his experiences in the CCC, at the Chicago World’s Fair, hopping freights, attending college, driving cross country in a ‘baby blue’ Model A Ford, and sailing to the Arctic with Donald B. MacMillan. With marriage, family, and career came years of hunting, fishing, and harvesting Maine wild blueberries.

18 graphite drawings by Dawn Marion, bring the tales to life!

Walter Staples (1913–2004) is the author of The North Bay Narrative, a narrative history of a Newfoundland outport community, Blueberryland, a history of the Maine wild blueberry phenomenon and his experiences with his own blueberry land, and Country Boy And Selected Poems, “a gift to his family and friends and to anyone who places a value in a life well lived”. He is also the author of many magazine articles on a wide variety of subjects. He and his wife Millie raised their nine children on their own farm in Tamworth, NH while he pursued his career as a poultry health scientist. His objective for this memoir is to record for his children, grandchildren, great-grandchildren and others of their generations what it was like to grow up in rural Eliot, Maine, in a time of influenza, war, depression, and adventure. He left the family farm to join the Civilian Conservation Corps, travelled to the Chicago World’s Fair, hopped freights during the depression, drove cross country in a baby-blue Model A Ford, attended college, and sailed on an Arctic expedition with Donald B. MacMillan. He has recorded the everyday experiences as well as the adventures with observations on local characters, school, community, and family life, picnics at York Beach, hiking, hunting, fishing, and trapping.