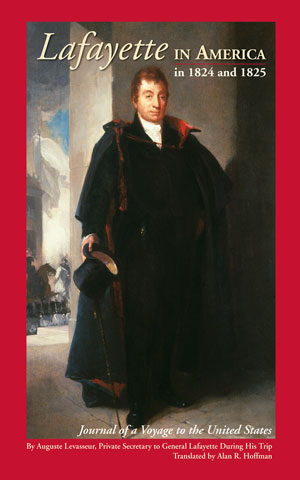 Journal of a Voyage to the United States
by August Levasseur, translated into English by Alan R. Hoffman

“Alan R. Hoffman has made a very great contribution with his translation of Levasseur’s Journal.”

“Alan R. Hoffman has done a masterful job of reacquainting us with a classic text that deserves wider recognition. Auguste Levasseur’s account of Lafayette’s visit to America in 1824-25 is a ringside seat at one of the great events in American social and cultural history. Through this fine new English translation, we are able to come along as Lafayette travels to all twenty-four states in the Union, accepts the adulation of a nation, and has adventures aplenty, including a harrowing shipwreck. What makes the account all the more valuable as a commentary on America is that it reveals how very fitting was Lafayette’s sobriquet ‘The Nation’s Guest’, as he insisted on spending time not just with the country’s elite, but also with ordinary citizens, African Americans, and American Indians.”

“Levasseur’s journal offers a lively, day-to-day account of a European’s experience of the United States in the fiftieth year of independence. As he relates the details of what he saw and heard, his encounters and conversations with people of all kinds, the enthusiasm of the great crowds that welcomed Lafayette, the reader gains a sense of how close Americans still felt to their Revolution and how proud they were of what they had done.”

“Alan R. Hoffman has offered us a rare piece of American history and a detailed look at 19th century America. This book is truly, as Hoffman writes in the preface, ‘a labor of love’.”

Auguste Levasseur’s Lafayette in America is a journal of General Lafayette’s 1824-1825 Farewell Tour of all 24 United States. In this book, Lafayette’s private secretary describes how the now 67-year-old hero of the American Revolution and apostle of liberty in Europe was welcomed in an adoring frenzy by the American people. With its panoramic view of the young country – its burgeoning cities and towns, its technological innovations like the Erie Canal, and its industrious people – this book captures America on the cusp of its jubilee year.

A decade before Tocqueville, Levasseur came, observed and reported on the state of the American Republic. He describes the Americans’ enormous pride in the republican institutions created by the revolutionary generation and the ensuing growth and prosperity. He recounts their intense feeling of gratitude towards those who had won the republic, among whom Lafayette was the sole surviving major general of the Continental Army.

Levasseur also chronicles Lafayette’s affectionate visits with his old friends John Adams, Thomas Jefferson, James Madison, James Monroe and John Quincy Adams, and his encounter with Senator Andrew Jackson. A keen observer, Levasseur gives us a sense of the characters of these men who, with Lafayette’s paternal friend George Washington, led the United States through its first six decades.

Levasseur does not overlook the searing problem of “Slavery of the Blacks” and the plight of the Indian tribes. Echoing Lafayette’s views, the author describes slavery’s deleterious effects and advocates education and gradual emancipation as a practical solution. He also comments on the ravages that “civilization” had visited on Native American peoples and portrays sympathetically the plight of the Creek Nation, forced to abandon its ancestral homelands in Georgia and Alabama.

Alan R. Hoffman holds a B.A. degree in history from Yale University and a J.D. degree from Harvard Law School. He lives in southern New Hampshire and practices law in Boston. Passionate about American history and Lafayette, he spent three years working on this first unabridged English translation of Levasseur’s journal and readying it for publication. He is president of the American Friends of Lafayette and the Massachusetts Lafayette Society, and lectures on Lafayette.
www.lafayetteinamerica.com

Wings in the Wind; Julia Walsh, Illustrated by Karel Hayes and John Gorey

Spirits of Amoskeag: The Wounded Heroes of the Manchester Mills; Lois Hermann,...
Scroll to top