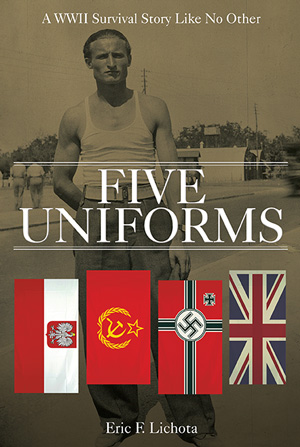 Five Uniforms: A WWII Survival Story Like No Other

Five Uniforms is based on the true story of one man’s experience through the entirety of World War II. Torn from his family as a young boy during the German invasion of Poland on September 1, 1939, Kaz fights his way across Europe in four different armies–Polish, Russian, German, and British. Follow in his footsteps as he is pushed to the limits of endurance and learns to survive as both a soldier and a prisoner of war.

In the USA and in Russia, WWII is always presented as the war of choices, of good versus evil, and it has taken on a mythological aspect that obscures the reality that most people were apolitical until they no longer had the choice of remaining so.This story about the author’s father makes it clear that whatever the great leaders of Europe were doing, the common man was just trying to stay alive, and that that mattered as much, or more, than the grand landscape of “history.” The description of rural Poland at the outbreak of the war is also fascinating, in that the Poles have such a great reputation and long, long history of science and advanced scholarship (think of Copernicus or Marie Curie) that it is incredible to learn of the poverty and ignorance existing in the rural villages at the outbreak of WWII. The author’s father’s example of going from an illiterate rustic to a multi-lingual leader through only a short opportunity for training and learning provides a good answer to the old “nature versus nurture” question of human ability and potential. Surely without WWII his life would have been very different, and in many ways less rewarding. This is a book that should prompt a lot of reflection among those interested in history and WWII in particular.

Eric F. Lichota was born and raised in Swindon, Wiltshire, England. After serving in the British military he made his way from England, to the Caribbean, and finally to the United States, where he currently resides with his wife.