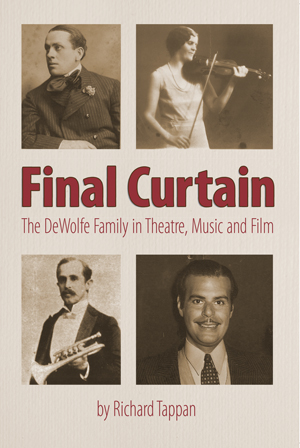 Final Curtain, The DeWolfe Family in Theatre, Music and Film

Final Curtain is a history of the author’s maternal grandparents, Billy DeWolfe and Mabel Keyes DeWolfe, who were prominent in the music and theater world of Boston’s North Shore during the early 20th century. Billy was a well known vaudeville actor and theatre manager. Mabel was a professional violinist and leader of several all-women music groups—unusual in her time. Final Curtain provides a look into their personal and professional lives against the background of world events.

Richard Charles Tappan is a veteran educator, having taught English, literature, journalism, drama, and the writing process at the middle- and high-school levels for almost thirty years. He received his B.A. and a Master of Arts in Teaching from the University of New Hampshire. He was the drama director and English teacher at the Oyster River High School, Durham, New Hampshire, from 1981 until 2000, producing and directing ambitious stage productions. In 1989, Tappan received the Merrill outstanding secondary educator award from Cornell University. After retiring from teaching, Tappan became an associate with the consulting firm, Center for Assessment. He has published articles and short stories as well as the novel Voices from Cold River, based on the life of Sarah Mariah Tappan, his paternal grandmother. The novel was a finalist for the 2006 Peter Taylor Prize.

Poet On Demand: The Life, Letters, and Works of Celia Thaxter

Searching for the Cheneys, A Memoir with Stories and Genealogical Lines; Randall...
Scroll to top