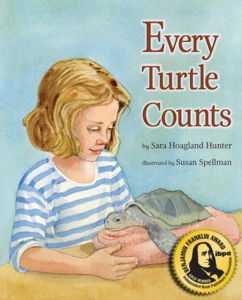 Each year, highly endangered young sea turtles wash up frozen on the beaches of Cape Cod, thousands of miles from their nesting ground. The massive effort to rehabilitate and relocate them has resulted in beach walkers, local organizations, and a large aquarium all pulling together to save the planet’s rarest breed of sea turtle, the Kemp’s ridley.

When one of earth’s rarest sea turtles washes up on the shores of Cape Cod, only one special child is sure it can be saved. Based on the extensive national effort to preserve the last of the Kemp’s ridley turtles, Every Turtle Counts is the touching story of Mimi, a seven-year-old whose challenges, like the turtle’s, are many but whose determination is undaunted. In the tradition of her award-winning story of the Navajo Code Talkers of World War II: The Unbreakable Code, and her seasonal classic: The Lighthouse Santa, Sara Hoagland Hunter once again portrays with power and sensitivity the achievements of the unsung heroes among us.

Sara Hoagland Hunter is the author of ten books for children, including Miss Piggy’s Night Out (Viking/Penguin), The Lighthouse Santa (UPNE), based on the Christmas flights of Edward Rowe Snow, New England’s hero to lighthouse families; and The Unbreakable Code, the story of the Navajo Code Talkers of World War II, which won a Spur Award, a National Council of Teachers of English award, and was named a Smithsonian magazine notable children’s book of the year. In 2006, The Unbreakable Code was presented by the governor of Arizona to all 100,000 fourth graders in the state. Hunter is a former writer/radio producer for The Christian Science Monitor and also a songwriter whose songs for Warner Bros. Baby Looney Tunes air around the world. She is a popular speaker to students as well as adult groups. Visit her website: www.sarahunterproductions.com

Susan Spellman began her career illustrating educational filmstrips of fairy tales and folklore before illustrating more than thirty books for children. She has received Gold Mom’s Choice awards for both Satchi and Little Star and Where is Simon, Sandy? by Donna Marie Seim. Her studio is in Newburyport, Massachusetts, where she lives with her husband Jay and their lovely daughters. Visit her website: www.suespellmanstudio.com

Tadem, My Father’s Village: Extinguished During the 1915 Armenian Genocide;...