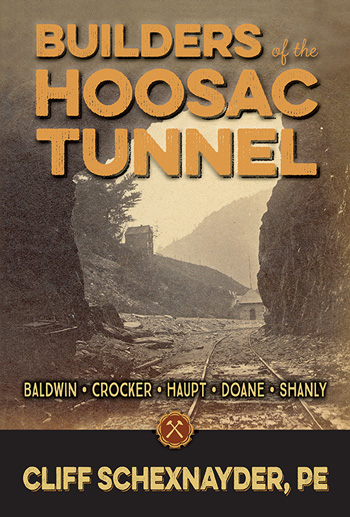 Builders of the Hoosac Tunnel

“Builders of the Hoosac Tunnel is a fascinating book describing the politics, society, financing, and construction practices as well as civil engineering education during the late 18th and 19th centuries. The tale begins with a chilling description of the worst accident which occurred at the mountain on October 19, 1867 killing thirteen workers.”

“Built at a time when American engineers were just beginning to experiment with industrial construction methods and equipment, such as deadly explosives, pneumatic rock drills and cast-in-place concrete, the Hoosac Tunnel brought great risks. Schexnayder digs deep to provide an amazing level of detail and perspective in his account of one of our nation’s early civil engineering feats.”

“With Cliff Schexnayder’s momentous work, for the first time the Hoosac Tunnel Saga is examined within the context of its contemporary American history. It is the most complete documentation on the Promotors, Detractors, Engineers, Contractors, and Managers of the fabled Hoosac Tunnel and Troy & Greenfield Railroad ever produced.”

—Carl R. Byron, author, A Pinprick of Light; The Troy and Greenfield Railroad and its Hoosac Tunnel

Builders of the Hoosac Tunnel traces the interactions between those who worked to build the Hoosac Tunnel of Massachusetts and those who struggled mightily to hinder its construction. The driving force behind the Tunnel and a thread through the book is Alvah Crocker, paper magnate from Fitchburg. The first to broach the idea of tunneling the Mountain is the father of American Civil Engineering Loammi Baldwin Jr., son of the Revolutionary War hero and builder of the Middlesex Canal, Loammi Sr. There is a parade of builders: Herman Haupt who during the Civil War earned a reputation as Lincoln’s railroad man, engineers Thomas Doane and John Brooks who pushed, China merchant turned railroad man John M. Forbes’ railroads into Iowa before the Civil War, and finally the Shanly brothers from Canada who achieved daylight through the Mountain.

In the early to mid-nineteenth century construction of the railroads was achieved by the brawn of man and beast. As a small band of individuals struggled to bore a five-mile tunnel through the Hoosac Mountain they immediately sought to develop machines and methods to speed their work. Herman Haupt, former Chief Engineer of the Pennsylvania Railroad, experimented with steam powered rock drills. But it was Charles Burleigh of Fitchburg who finally perfected a working pneumatic drill capable of beating on hard rock for hours and days without destroying itself. Thomas Doane designed drill carriages for the new tool and conducted precise surveys to direct the miners. George Mowbray refined the production of nitroglycerin. Charles A. Brown perfected an electric blasting fuse. These accomplishments are the story line that presents the heroes and villains of the book.

Cliff Schexnayder is the author of Construction Planning, Equipment & Methods, McGraw-Hill higher education, in print since 1995 and an Arizona State University Eminent Scholar, Emeritus. He was awarded a fellowship from the Smithsonian Institute Libraries to research this book. He holds a Ph.D. from Purdue University, and B.S.C.E./M.S.C.E. degrees from Georgia Institute of Technology. Cliff was awarded the American Association of Engineering Societies, Norm Augustine Award for Outstanding Achievement in Engineering Communications in 2011 and the American Society of Civil Engineers OPAL (Outstanding Projects and Leaders) Award—Education in 2012. He was also awarded the Tasher H. Bliss Award of The Society of American Military Engineers, for outstanding contributions to military engineering education, 2001. He worked as an engineering consultant supporting the National Museum of the American Indian’s landmark exhibition, The Great Inka Road: Engineering an Empire. Cliff is a member of the National Academy of Construction, the Academia Panamericana de Ingeniería, and a Distinguished Member of the American Society of Civil Engineers. Additionally he is a Profesores Honorarios de Facultad de Ingeniería (Honorary Professor Faculty of Engineering), at the Universidad de Piura, Piura, Peru and a Honorary Professor, Ricardo Palma Universidad, Lima, Peru. He lives in Branford, CT.

A Guide to the Geology of Southwestern Maine; Arthur M. Hussey II, PhD
Scroll to top