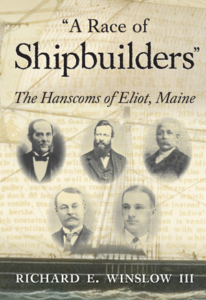 “A Race of Shipbuilders”
The Hanscoms of Eliot, Maine

In the 1600s, members of the Hanscom family settled in the Kittery – Eliot area of Maine as British colonial subjects in the New World. Over a period of three hundred years, a number of their descendants became nationally known shipbuilders and naval constructors. This book describes their successes, accomplishments, trials, and tribulations in forging their imprint on the maritime – marine – naval world.

Rather like a mirror reflecting the American experience, the Hanscoms were participants in the Revolutionary War, the California gold rush, the Civil War, Union Navy Yards, the Steel Navy, the luxury steam-yacht mania, the Spanish-American War, and the era of gigantic transoceanic merchant marine/passenger vessels.

Richard E. Winslow III (MA, History, University of New Hampshire) brings to this study more than forty-five years of research, writing, and publishing about New England ships. For the last three decades, he has been associated with the Portsmouth Marine Society. This biographical survey of the seafaring Hanscom family of Eliot, Maine, is Dick’s sixth book published by the Society, and he shares with that illustrious family a lifelong interest in all things maritime.

The Witches: A Winnipesaukee Adventure
Scroll to top